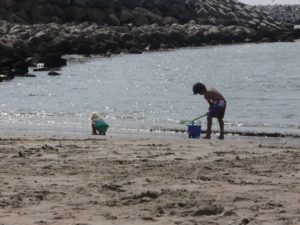 I’ve come close to drowning a couple of times, but once I was pretty sure I wasn’t going to make it.  I was a bad surfer with a worse board.  I’d only been surfing for a year and I had started as a young adult.  There was an off-shore storm, so, on the East coast, that was often our best chance to surf.  I had a refurbished, patched up third-hand short board with no leash.  The storm was bad enough that there were only two groups on the beach: storm watchers complete with video cameras and surfers.  I dropped in, and proud of myself, decided to go a couple of hundred yards past the group of about half a dozen surfers, to the 2 that were farther out.  I sat waiting, and waiting, and waiting some more.  Then about a quarter mile out, a couple of large waves broke.  The white water was coming in pretty tall and wide, but I decided to try to ride it in.  I started riding and it was big and bumpy, so I didn’t stand.  It was fun, but after about 15 seconds I decided I’d been knocked around enough and I figured I must be close to shore, so I threw my board.  The white water knocked me under.  When I came up for air I noticed that (a) I was in over my head, (b) I was still far from shore, and (c) there were two more walls of white water rolling in.  I looked to my right: about 40 yards away there was another surfer struggling to stay on his board, but he was already past me on his way in, and besides there was no way he’d see me in the churning water.  There was no way anyone on shore could save me, so I didn’t bother waving my arms or screaming.  I slowly started swimming.  The problem was, I was not in great swimming shape and I had tired myself out dropping in.  That combined with recovering from a rough night out left me without the energy to swim.  I decided to try to let the wave carry me to shore.  When the next wall of white water hit, I tried to ride it, but quickly got knocked down and tumbled around.  I started swallowing sea water, but managed to get up for air.  I was a little closer to shore and the next wall was about to hit.  I floated, feebly moved my arms in a swimming motion, and tried to ride it.  This time I ended up swallowing sea water once, then again, and a third time.  But then, I felt my toe touch ground.  I half swam, half trudged the rest of the way.  I retrieved my board from the rocks.  Humbled, nauseous and worn out, I made my way past the storm watchers.  An older surfer, clearly in much better shape than I, addressed me.  “Hey, how you doin’? When I saw you go into this storm with that homemade board and no leash, I thought, either this guy is really, really good or stupid…”

“The latter” I mumbled.

“Yeah, about every 45 minutes this storm has been sending in giant sets—that’s what you got caught in.  I was watching you: you are really lucky, I thought you were a dead man, for sure.”

Most of us can’t imagine what indefinite homelessness and hunger are really like, so it’s hard to empathize.  We think it’s possible for the homeless to just pull themselves up if they really wanted to.  From my work with them, I’ve discovered it’s more like drowning: you can’t pull yourself up when your arms are tired already from swimming and there’s no one around who can lend a hand.  You have no board and no leash to hang on to.  Every day you are gasping for breath.  Many days you swallow sea water and don’t think you’ll make it to the next.  Many of them don’t.

Are we going to get in a helicopter and try to rescue them all? Are we going to be part of the wave that pushes them all to shore, so they can make their way?